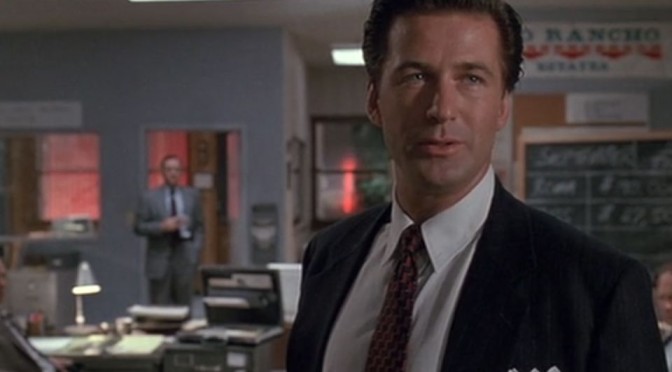 David Mamet is my favorite playwright, and one of the only ones working today who try to see the world as most Americans live it.  Although theater has become something for the coastal elites in the big cities, his work always speaks to the ordinary person.  This scene from Glengarry Glen Ross is tremendous drama, but it speaks in plain English that anyone can understand: (NSFW: Language warning)

Mamet also gave the most effective definition of drama I know:

QUESTION:WHAT IS DRAMA? DRAMA, AGAIN, IS THE QUEST OF THE HERO TO OVERCOME THOSE THINGS WHICH PREVENT HIM FROM ACHIEVING A SPECIFIC, ACUTE GOAL.

This is taken from a memo from him to the writers of a TV series he was producing.

All of this is common sense, but it takes hard work to write like this.  The default setting for most of us is talking about how much we like our customers, how special our people are, and how awesome the new feature set is.  Nice, but not dramatic.

Next time you write a piece of content for your brand, be completely unambiguous about these three things—who the hero is, does the goal really matter, and what obstacles have to be overcome.

In a world where the emotional ante keeps increasing and the supply of content keeps doubling, dramatic writing will make a huge difference in connecting with the buyers you need to keep your business strong.