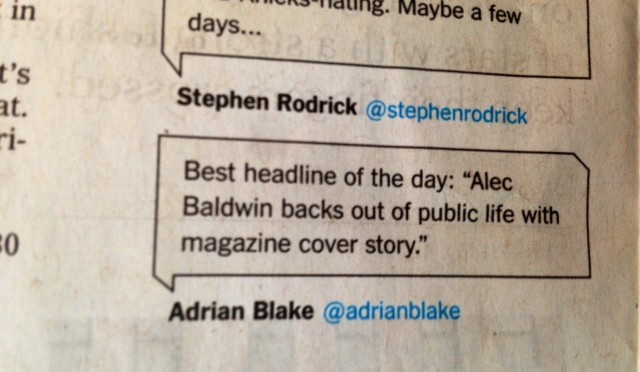 In the second of our Alec Baldwin series, a tweet of mine about Mr. Baldwin’s noisy exit from public life was picked up yesterday by the New York Times.

It’s nice to be picked up by the elite’s hometown paper, and it was nice to have old friends reach out to me to tell me about it.  But it doesn’t necessarily convey professional benefits.  Do I need to add “plugged into pop culture” to my brand?  Not really– I have that one pretty well covered.  It would have been a lot better for me if the Times had passed along something I said that was insightful about the changing strategy of brands in the social media era.  (Note to self:  Tweet more about things that are professionally valuable.)

The Baldwin tweet is a data point that will be seen by many people, but it doesn’t do a lot for my brand.  On the other hand, if I can start getting quoted in the press regularly, it will convey real authority as those data points accrete.  (NPR, IBA, New York Times…. hey, I might actually know what I’m talking about.)

Wide exposure to a slightly off-target data point isn’t bad.  I reemphasize brand values which are secondary but relevant (funny, plugged in) and I potentially pick up new followers.  (Yesterday I did pick up quite a few Twitter followers, but it’s hard to tell what made them follow me.)  It may help for SEO, but it’s too early to tell.

(Incidentally, yesterday I was teaching an Entrepreneurship class at Creighton University when I got the news about the Times.  The slides are here.)

The New Social Media Landscape; Welcome to Somalia from adbomaha

Having the right creative matters, but having the right distribution matters too.  That tweet might have been trivial, but it was well-distributed, and something may come of that.  But where the rubber meets the road, someone subscribing to this blog is a lot more valuable to me than someone seeing one witty tweet on paper.  Attention is nice, but it doesn’t always create value.

Your brand is a sponge and mine is too.  And now I get a little of Alec Baldwin’s and The New York Times‘ brand mojo rubbing off on me for a short time.  That tweet is a nice thing for my brand, but this game is about building up lots of data points, not just one, and specifically data points that show that I’m valuable, not just that I’m amusing.