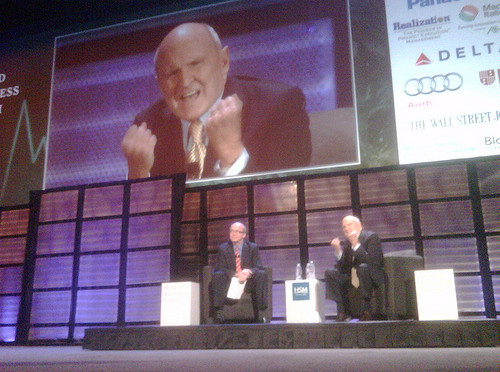 Jack Welch is no dummy.    He evokes the 1990’s as powerfully as Friends or Smells Like Teen Spirit, but he has understood what social media is about for a long time.  (How many 79-year-olds have 1.4 million Twitter followers?)  From a tactical perspective, he’s good at Twitter and LinkedIn, but his real contribution comes from his #1 or #2 rule.

Back when he took over GE in 1981’s, GE was a conglomerate with over 350 business units.  The majority were in manufacturing in the USA.  At that time, Asia was about to take over the manufacturing industry with cheaper products made by cheaper labor.  Welch could see what was coming, and it was going to be ugly for a complacent company who felt it was entitled to its position.  He had three fundamental components to his philosophy, all of which reinforced each other:

He did this because he saw the competition that was coming.  Companies that felt they deserved to be on top would be stepped on, and only the truly hungry would survive.  He changed the culture of GE, getting rid of hundreds of business units and adding dozens of new, more efficient ones, all in keeping with his philosophy.  He was not interested in being the biggest, but in being the best.  (And by being the best, they of course became the biggest.)

This is why new people aren’t reading your blog—even if you get Google or Bing’s attention, it’s hard to get to the top of the food chain.

How do you fix this?  Tactically, do all the things you know you need to do.  Run down your social media checklist of all the blocking and tackling that needs to be done.

Welch’s other two rules fit well also—be ruthlessly efficient about your social media.  Don’t waste time on things that aren’t working.  Test and measure.  And be humorless about talent.  Don’t give your social media to the youngest and cheapest person you find.  Owning social media means owning the brand.  It’s a sobering responsibility, and not everyone can handle it.

Too many times we assume that the lessons from the past don’t apply in this era.  Social Media has upended a lot of received wisdom about Marketing tactics, but it hasn’t invalidated much strategic thinking.  Welch’s rigor and focus are a perfect fit with the social media era.  Almost perfect competition means that the lazy will be eaten, and people will barely notice.

He may be a 79-year-old man and a bit of a loudmouth, (think Gary Vaynerchuk’s even more outspoken uncle from Boston) but ignore him at your peril.  He knows what it takes to win in viciously competitive markets.  This stuff works.