I spent this weekend on a silent retreat at a Benedictine mission house in Schuyler, NE.  Why would I want to do something like that? First, a friend of mine, who is just as extroverted as me, suggested it, saying it was hard but fantastic.  Second, it’s a very noisy world, and I thought it might be useful to find a way to turn down the noise a little.  Third, it was organized by The Gravity Center, one of my favorite organizations.  Thought it might be good to stretch my limits a little.

I had been informally working with Chris and Phileena Heuertz at The Gravity Center on messaging, as it was never clear to me what their tagline– “a center for contemplative activism”– meant.  Well, now I think I get it.

As a divorced Catholic, my relationship with organized religion is somewhat, um, nuanced.  I go to Mass on big holidays (unless I sleep late).  As a divorced guy, I don’t take communion (unless I have the urge to).  My relationship with Catholicism is a mess, and that’s too bad, because I grew up in it, and I know all the dance steps.  But I also know that my life always goes better when I am paying attention to God.  The hard part is to find a way to relate to God that respects my roots as a Catholic.  I don’t want to go Protestant, or Jewish, or Ba’Hai, but the Catholic Church isn’t particularly open to me at the moment.

I arrived with no expectations, except for the sense that I needed to make some changes to get my life back into balance.  Even if those changes involved yoga.  I actually had no idea what I was doing there, but had faith that it wouldn’t be a mistake to check it out.

The retreat took place at the Benedictine Center in Schuyler NE, about 90 minutes from Omaha and out in real ag-land Willa Cather country.  The Mission House is like a modern comfortable college dorm, and across the street is a genuine monastery, where 12 monks from Germany(!) do their work.  Spectacular, modern setting, and not what you expect to find among the cornfields.  The isolation makes it deeply peaceful, and the fact that cellphones don’t work inside the center was not lost on me.  The sound of the wind in the grass and bells from the monastery are the soundtrack.

It sits on about 20 acres, with lots of room for walking, including a  minimalist Stations of the Cross circuit set up in a pasture.  The fields look  like this. 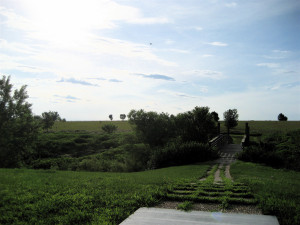 The essence of what Gravity Center does is Meditation (using Christian Traditions).  Nothing shocking, but repossessing tools that aren’t often seen in a Christian context.  Net/net, saying “Amen” instead of “Om.” But it works just as well. 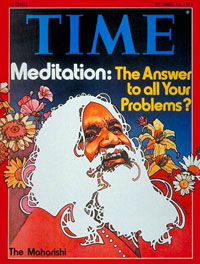 Or Tomorrow Never Knows, the one song everyone skips over on Revolver.

So meditation seems a little dated.  But the idea of clearing the mind of chatter so that one can (a) be quiet, and (b) hear deeper wisdom makes a lot of sense, and has been practiced in the Christian Tradition for a long time.   It also could not be more relevant to the life I am living (and most of us) are living these days– overscheduled, overstimulated, always living in fear of missing something.

The method we practiced on the weekend is known as centering prayer, and this is a useful guide to how it works.  In principle it’s really simple– pick a word, focus on it for 20 minutes, and let other thoughts drift away.  In practice, it can be very hard, especially for my fast-twitch, overstimulated brain full of social media, TV Theme songs, and to-dos.  Fr. Thomas Keating introduces the concept in a short video here.

So what we did was practice a few kinds of Christian Meditation.  Some of which are easier than others.  The basic unit was a 20-minute “prayer sit” where we would sit silently in a circle (some on chairs, some on cushions) and chill.  Like many things, meditation is something that is entirely doable alone, but there’s something helpful about struggling through it in the company of others.

Most of what we did was Centering Prayer, but we also did some passage meditation, lectio divina, and the examen.  (By the way, here’s a great article from Harvard Business Review by a Managing Director at JP Morgan about using the examen as a tool to manage our fast-paced world.   I’m sure the Jesuits are delighted that they’re making JP Morgan more efficient doing God’s work.)

What was the schedule?

The three values that we kept to were silence, stillness, and solitude.  That had some challenging implications, but helped enormously in getting the mind to quiet down.

The retreat ran from Friday Night to Sunday Noon, with 40 hours of silence in the middle.  During the silence, Chris and Phileena would talk us through everything we needed.  Meals were taken in silence.  We would have 20-minute prayer sits with short breaks.  In total, we probably spent 6 hours in meditative prayer.  Interspersed were lots of breaks (to be taken in silence and solitude) and tragically for me, three sessions of Yoga.  Too many years of good living, sitting in comfy chairs, and not stretching have left me with the flexibility of a stainless steel stove.  Running 2 miles a day doesn’t help either.  I’ll just say everyone was very kind.  In fairness, one of the sessions was spent completely still lying on the back as we were guided through controlled relaxation.  I liked that part.

Was the Silence Hard?

The fact that the retreat was silent scared me the most on the way there, frankly because I had no idea what else we were doing.  (If you had told me were doing meditation and yoga, that might have scared me more than the silence.)  In context, the silence was a complete relief.  I was thrown into a vulnerable position with a bunch of strangers (supportive, but strangers) and frankly, making small talk (I have a gold medal in small talk) might have been challenging.  It was a huge relief to just shut up for a while.  Also, the transformation you go through on a retreat like this is hard to articulate while it’s happening.  Much better not to try to explain the unsayable to people you just met.  The silence keeps you focused.  The tough part was meals, as we all were trying to avoid eye contact with each other and eat in solitude.  I will say this– eating in solitude changes the way you look at food.  Every bite matters, so there’s much less mindless stuffing of the face.  I probably ate one-third less than what I normally do, and almost every choice I made was healthy. Hmmm.  (By the way, the food was great.)

Was the Meditation Hard?

It was very simple, which doesn’t mean it was easy.  Clearing your mind is a very simple idea in principle, but where the rubber hits the road, it can be really hard to get those profane thoughts out of your head when contemplating the sacred.  Pop songs, teenage crushes, perfect comebacks to long-ago insults, shapes and colors– so many things fill your head when you’re trying to clear it.  It takes a lot of discipline to keep coming back to your sacred word.  But when you do, it’s pretty transcendent.  The time really melts away, and you go into a sleep-like state.  Unbelievably refreshing but also disorienting.  And I didn’t get to that place in every single 20-minute prayer sit.  But I got there probably 5 times out of 8.  I assume that will get better.  But as Keating says in the video above– you can’t get this wrong.  Simply to do it is an invitation.  And that’s the point.

So what about the God stuff?

I was waiting for that question.  Let me start with a few statements so you know where I stand.

So having said that, this is what came through to me.

So What Did You Get Out of It?

Great question.  Anytime you do something hard with other people, there’s a spirit of camaraderie and teamwork, even if you can’t talk to each other.  We all had each other’s back, and that’s a great feeling that doesn’t come around enough.

Also, the act of shutting the mind down 20 minutes at a time was really refreshing.  I feel like my brain has had a good scrubbing, and a lot of crap that has accumulated there over the years was rinsed away.

The most immediate thing I took away was a different sense of time.  I usually gyrate between being bored and afraid that time will drag out too long (so in need of distraction) and being stressed because there’s not enough time.  After a few sessions of meditation, I realized there was always enough time.  Having time with nothing to do is a blessing, not a cause for panic.  The point is to be present in what you’re doing, not constantly distracted.  Most of us live our lives (at least I do) in a state of constant distraction.  That takes its toll on our performance and our relationships.   Mindfulness seems like a confusing idea until you get there.  John Lennon used these words to define rock’n’roll (and Oasis made a terrible album by this name) but the idea of mindfulness is simple– Be Here Now.  This retreat made it a lot easier to Be Here Now.

Try and keep up the practice, or as Chris said, turn the practice into a discipline.  So far, I am one-for-one, as I got up and did 20 minutes early this morning.  One down, several thousand to go.

Like anything worth doing, it’s you vs you.  And it’s not trivial to keep it up.  But I see the fruits of doing it every day, and I am eager to get there.  Wish me luck.

P.S.  Here’s a good video that evokes what the weekend is like:

For more info on the Gravity Center retreats, see this page.