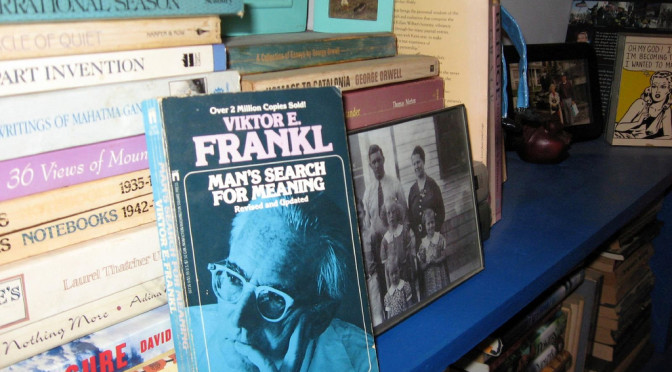 Viktor Frankl made a titanic contribution to human understanding.

He was held in Auschwitz during World War II, and endured horrible privations.  Maybe we’re all so familiar with the Holocaust that we lessen its severity, but it was as ambitious an act of cruelty as homo sapiens has ever been involved in.  Every day Frankl and his fellow inmates worked at pointless labor, froze or sweated depending on the elements, and starved.  As the war worsened, the welfare of these inmates became even less important to their jailers, and numbness set in for everyone.  And then one day, the war was over, and Frankl was released.  He had no one waiting for him.  His wife had died in the camps.  His family was dead.  He had suffered through years of imprisonment and cruelty.  So what exactly was the point of life?  Why go on?  More specifically, why did some prisoners survive the camp while others died?  Conditions were equally cruel on all prisoners, so shouldn’t they all have met the same end?  As a psychiatrist, he thought he might have a way to answer that question.

That question was answered in Man’s Search for Meaning.  His principal finding was that those who survived were those who took meaning from life, or as he called it, “the intensification of inner life.”  Even when there was no hope, they found meaning in getting up every morning and conducting themselves the best way they knew how to.

No matter what the circumstances, man has the right and the ability to choose how he reacts:

But what about human liberty? Is there no spiritual freedom in regard to behavior and reaction to any given surroundings? … Most important, do the prisoners’ reactions to the singular world of the concentration camp prove that man cannot escape the influences of his surroundings? Does man have no choice of action in the face of such circumstances?

We can answer these questions from experience as well as on principle. The experiences of camp life show that man does have a choice of action. … Man can preserve a vestige of spiritual freedom, of independence of mind, even in such terrible conditions of psychic and physical stress.

[E]verything can be taken from a man but one thing: the last of the human freedoms — to choose one’s attitude in any given set of circumstances, to choose one’s own way.

He quotes Nietzsche: He who has a why to live for can bear with almost any how.

Most powerfully, he says there is no point searching for a universal meaning of life.  Every path is different, and one size does not fit all.  I can have a meaning for my life, and that can be very different from the meaning that you have for your life.

What was really needed was a fundamental change in our attitude toward life. We had to learn ourselves and, furthermore, we had to teach the despairing men, that it did not really matter what we expected from life, but rather what life expected from us. We needed to stop asking about the meaning of life, and instead to think of ourselves as those who were being questioned by life — daily and hourly. Our answer must consist, not in talk and meditation, but in right action and in right conduct. Life ultimately means taking the responsibility to find the right answer to its problems and to fulfill the tasks which it constantly sets for each individual.

These tasks, and therefore the meaning of life, differ from man to man, and from moment to moment. Thus it is impossible to define the meaning of life in a general way. Questions about the meaning of life can never be answered by sweeping statements. “Life” does not mean something vague, but something very real and concrete, just as life’s tasks are also very real and concrete. They form man’s destiny, which is different and unique for each individual. No man and no destiny can be compared with any other man or any other destiny. No situation repeats itself, and each situation calls for a different response. Sometimes the situation in which a man finds himself may require him to shape his own fate by action. At other times it is more advantageous for him to make use of an opportunity for contemplation and to realize assets in this way. Sometimes man may be required simply to accept fate, to bear his cross. Every situation is distinguished by its uniqueness, and there is always only one right answer to the problem posed by the situation at hand.

We are all on a difficult journey through life, and there is no silver bullet.  As Ben Horowitz says, there are just a lot of lead bullets.  The work has to be done, the work is often hard, and there are no short cuts, no matter how much we want them.

The people who he saw survive the camps, and any other tribulations they faced (because the cruelty of human experience doesn’t stop simply because you’re released from prison) had these three things in common:

Frankl wasn’t the first to inquire about the meaning of life, but his book has struck a chord that few philosophers have.  It’s profound but short, and if you haven’t read it yet, do it now.  It will stay with you for the rest of your life.

P.S.  Nice post, bro, but what does this have to do with social media?  Well, social media is communication, which is about understanding the audience and what they are experiencing.  You are not the only one looking for meaning.  You are not the only one who needs the truth.  You are not the only one who needs to improvise.  If you treat your readers with disrespect and churn out crap, you don’t deserve to be read.  The bar is too high today.  But if you connect to meaning, to intellectual integrity, and to opportunities, you will connect with your reader on a much deeper level.  Are you churning out marketing copy, or are you trying to connect with human beings?  You can use all the modern tools to do either.  Twitter and Pinterest can deliver banal messages or meaningful messages.  The choice is yours.